Over our 36 year history, Delivering Good has developed the expertise to provide support for individuals and families in times of crisis. When supporting any type of humanitarian crisis services, timing can be very important. Delivering Good’s role is to support people recovering and rebuilding their lives; most of this work is done after the initial rescue and immediate services from first responders, local governments and various agencies. Through the years, Delivering Good has been committed to providing assistance and support for impacted communities for days, weeks, months and even years after the initial event. 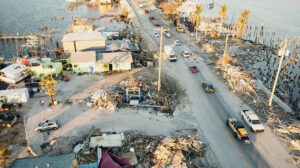 As we watch the devastation caused by Hurricane Ian, we are reminded of the reason why Delivering Good was founded and why we do what we do. This catastrophic event will leave its mark on communities in FL and along the southeastern coast for years. With lives lost and millions of people facing the destruction of their homes and communities, help and comfort will be required far beyond the immediate rescue and recovery efforts.

This is when Delivering Good’s work begins. Our team is in touch with partners on the ground in FL and beyond, to understand the challenges they are facing and to identify the items that are most needed at this time. At the same time, our product solicitation team is busy reaching out to our network of product donors to solicit donations of those most needed items. When roads have been cleared and areas of need are safe to access, we will direct those donations to our partners on the ground who will get them into the hands of the people who need them.

Help ensure that we always have the resources available to respond to any disaster with a generous gift today. With your support we will always have funds on hand to solicit and ship new items like clothing, bedding, children’s items, and other essential supplies to where it will provide comfort and relief to the many families and individuals who have been impacted by natural disasters like Hurricane Ian.

Help provide relief for individuals and families who have been impacted by Hurricane Ian with a generous gift today. Our hearts are with the many people impacted by the deadly flooding in Kentucky. Our partner, 4 Good Community, is active on the ground, providing essential services for those most affected and we are working with them to identify the items that are most needed and useful at this time. More than 1.4 million units of donated of critically needed new clothing including: socks, baby clothes, underwear, t-shirts, sweats and more have already been sent to affected areas - with more on the way.

For those who have lost everything, receiving new clothing can provide much more than just immediate relief. According to 4 Good Community,

"Out of all the resources we distributed, clothing was the most desired. This area is a very financially depressed region, and to add the disaster to that is horrible. We had people telling us that this was the nicest clothing they have ever had during the distribution. That made us feel good to have the opportunity to replace ruined clothing with something better than before, so thank you for that opportunity!"

Help us deliver comfort, relief, and dignity to those who have lost so much.

We are all shocked and saddened by the situation in Ukraine that has resulted in the displacement of more than 10 million people to date.  Many of those impacted are the country’s most vulnerable, single mothers with children, unaccompanied minors, the elderly, and the infirm. While surrounding countries are accepting refugees, the need for financial resources to support the growing number of people seeking safety is tremendous and will likely continue for the foreseeable future.

Over our 36-year history, Delivering Good has developed the expertise to provide support for individuals and families in times of crisis. We know how to work with the right partners, to get the right supplies, to the right place when they are most needed and right now financial support is the most critical need for relief groups on the ground in Ukraine and surrounding areas.

At this time, we are NOT looking to accept or solicit any product donations for this effort. Should a refugee population come to the US we will plan to support them with products as we have for Afghan refugees.

Please consider making a gift today to support the needs of Ukrainians who are fleeing their homes. 100% of funds raised will be passed on to our partners working in Europe who are directly involved in supporting the needs of those who have been displaced from their homes, separated from family, and facing an uncertain future.

Thank you in advance for your compassion and care for those who are dealing with so much trauma and uncertainty right now. It is only because of you and your generosity that Delivering Good can be there for those in need.

Help provide relief for Ukrainians who are fleeing conflict in their country with a generous gift today. In the wake of political upheaval in Afghanistan, tens of thousands of Afghan refugees have sought or are expected to seek refuge in the United States. As of September 16, 2021, an estimated 53,000 Afghan evacuees were temporarily residing at eight military bases throughout the mainland United States, with another 37,000 awaiting passage into the country. At present, the Biden administration expects up to 65,000 Afghans to resettle in this country by the end of October, and a further 30,000 to arrive in 2022.

For the children and adults seeking new homes in this time of crisis, the need for immediate material aid is enormous. And among the most needed items for refugee communities are new and high-quality clothes. This is especially the case for winter clothing such as warm coats, hats, gloves, and blankets; as well as basic necessities such as socks and undergarments.

While these needs exist for all age groups, they are especially profound in the case of children, whom studies have shown to suffer long-term psychological and physical consequences of the refugee experience – and for whom the provision of material aid, such as clothing, can be a major factor in improved conditions.

Delivering Good’s support for the resettlement of Afghan refugees to the United States is an ongoing emergency response. With support from Islamic Relief USA and other generous donors, we have committed to providing new clothing, including critically needed winter coats, for more than 9,000 men, women, and children who are working to create new lives in the US.

"Hanes Brand's generous donation of clothing, socks, and undergarments were received with much gratitude and thanks to everyone at Delivering Good. Thousands of families have been on various bases across the country for four months, many of which who came with only the clothes on their backs. An extensive sense of gratitude came not only from the Afghan evacuees themselves, but also from the sorting teams on the ground working with Rubicon, the many Afghan volunteers present on base since the first arrivals entered, and members of the Afghan American coalitions that were incredibly thankful to Delivering Good and Hanes Brand for the generous donation of brand new clothes.

Everything that Hanes donated through Delivering Good, from the undergarments, to t-shirts and the thousands of socks, have helped provide much more than clothing, but also a sense of dignity, support, and the feeling of welcome that our teams are working so diligently to provide. A sincere thank you for your generosity and continued support in helping thousands of Afghan evacuees prepare for their new lives in the United States."

You can help deliver good for struggling families and individuals with a generous gift today. Financial donations support Delivering Good's efforts to solicit and direct new product donations to our network of 1,000+ community partners across the country, supporting countless individuals living with poverty, disaster and other tragedies.

Are you with a company that is interested in donating new merchandise to support communities affected by natural or other disasters? Visit our product donation page and learn the many benefits of being a Delivering Good product donor.

The past several years, catastrophic natural disasters, increasingly powerful in their devastation, have left a lasting impact on affected communities. Delivering Good is committed to assisting and supporting impacted communities for the days, weeks, months and years after our initial distribution of goods. By coordinating closely with local partners about both their community's immediate and long-term needs, Delivering Good can provide donations of new apparel, home items, children’s products and other essentials that can help the recovery.

In 2021, Delivering Good assisted with recovery efforts for disasters ranging from wild fires, to tropical storms to devastating tornadoes, as well as provided ongoing support to communities still recovering from disasters that occurred in prior years. By mobilizing the children's, fashion, retail, and home industries, Delivering Good is on track to distribute more than 23million pieces of new merchandise to communities in need.

All donations will be used where they are most needed. If your donation is not needed for immediate disasters, it may be used for other communities in need. Please email any questions to [email protected].